Gunnar Nordstrom Gallery has offered Svetlana Shalygina’s works for a few years now and she has quickly become a gallery favorite with a variety of collectors adding her paintings to diverse collections. It is always interesting and a compliment to an artist when their works span a variety collector’s tastes.

This year Shalygina offers us a beautiful selection of works and the largest paintings  to date and we look forward to sharing her newest works with you.

In 1973, Svetlana Shalygina was born into a poor, humble working class family in Efremov, Russia. She and an older sister were raised in a small, studio apartment 200 miles south of Moscow by parents who worked in a local factory but were very devoted to their children. Svetlana grew up close to nature in wide-open Russian countryside and picturesque valleys which she sketched and painted throughout her childhood. It was here she developed a strong interest in Russian classical art, poetry, music and literature.

A naturally romantic curiosity about life took Svetlana to Moscow and St. Petersburg at age 18, where she lived and worked on her own. In Moscow, her intuitive art talent was fed by the greatest museums in the world, and nourished by the inspiration of the world’s unsurpassed classical masters. Svetlana also continued her quest for knowledge by travelling to Paris, Milan, Rome, Vienna, and other European cities to better harmonize her developing identity with the original work of modern masters. At 20, her life took a dramatic turn when she seized a remarkable opportunity to come to the United States. 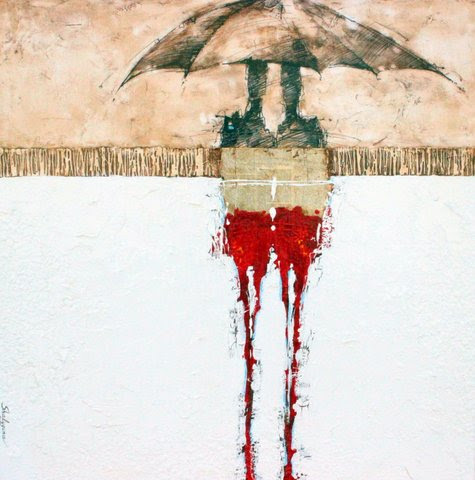 America was to become her second home, but saying goodbye to her supportive family and friends in the former Soviet Union was made especially difficult because complex immigration laws prevented her from returning for at least a decade. Her new life in the Land of Opportunity was difficult at first. She cleaned houses and washed dishes in a New Jersey restaurant. Discouraged and lost, Svetlana came to realize that no matter how hard she worked, an expensive formal art education in New York City would not become a reality.

In 1996, Svetlana Shalygina’s interests took her and her few belongings to Phoenix, Arizona where the desert’s sunny weather, great beauty, and affordable living heartened the young artist. For the next twelve years, she lived and maintained her studio in the American West. Without a formal art education, Svetlana took a different route to success—self-study, experimentation, and the development of a unique creative path.

The foundation of Svetlana’s unique style is the poetry and beauty she treasured as a child, and the love she still feels for her Homeland. The core of her creative expression is both personal and nostalgic—to the point she was originally reluctant to share her vision openly with others. Her maturing style has been strongly influenced by her love of nature and her interest in human behavior and emotion. Several years ago, Svetlana’s intriguing and sophisticated body of work was discovered by an accomplished fellow artist and art collector who encouraged her to expand her palette and unveil her creative vision to the world.

Svetlana Shalygina is now a full-time artist living and painting in California and happily, she now returns to her native soil each summer to visit family and friends.

What is the Future of Travel in the Post COVID World?